I had an experience… it was interesting

I had an interesting experience over the weekend. One in which I will  recount as a Ninja Kitties post (after a LOOOONG break from this blog).

My experience started in the Sound of Music-esque mountain tops of Canada. I spent the weekend hiking all over a British Colombian alpine range.

There was sun, the breeze was pleasant, and we had every intention of staying the night in an old fire watch tower at the top of a mountain.

Upon arriving at the tower, I was able to soak in the splendor that was British Columbia. Nothing could ruin this majestic trip to the top of the world!

Then night hit… and the nightmare began

I went to bed on the floor of the fire tower without an inkling of what madness was about to transpire. 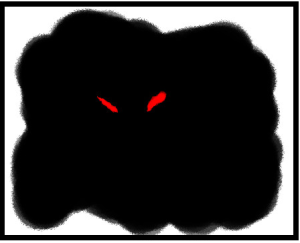 They came crawling out in the darkness. They targeted my face and exposed skin.

Kamikaze daddy longleg fighters assailed my inconspicuous sleepy self! I had no defense against their hair raising crawl. All I could do was slap them away, and hope they would stop. But of course they DID NOT…

I learnt something that night. Daddy longlegs (also known as Harvestmen) produce a distinct and pungent odour when threatened. So not only were there creepy crawlies marching up and down my face, but my nose was being overwhelmed with the aroma of these perplexing creatures.

In the end, I did what any sane person would do. I woke everyone up and made them set up a tent in the middle of the cabin.

In so doing, I won the fight… but not the war.

As far as evolution goes my artwork has gone from stick people, to semi-decent pencil figures, to water colour, to THIS. I now know acrylics are where it is at. Why hasn’t anyone told me this?

Anyway, this is essentially a painting about youth and wonder. It features a butterfly and is therefore postable on this blog. Please let me know if there is anything you would like to see painted!

A request was made for an illustration of a “flying” monkey. I initially thought “no, I won’t draw a flying monkey, that was already done in the Wizard of Oz.”  I quickly had a change of heart when I began to realize the loose nature of the term ‘flying’. My thoughts turned to  slow motion Matrix-esque action scenes as well as Chinese fight scenes where people are defying gravity all over the place. I therefore call the following painting ‘Jumping Ninja, Flying Monkey.’ The tree was added to emphasize the importance of nature in all good martial arts sequences (that’s not true, I actually just wanted to practice painting trees… but let’s just keep that between us). 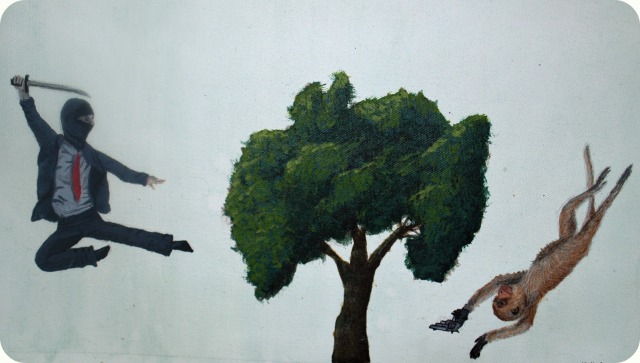 I received a request to draw a King Cobra yesterday. I thought it was a good idea. I felt like getting creative with both ink and paper, so the outcome is a bit ‘jazzier’than my other drawings. In all honesty I find these snakes terrifying. It is also for this reason I decided the snake should have a crown  (he clearly looks much more charming and handsome this way).

The drawing is also followed by a poem entitle “The Slithery Snake and the Crown.”

‘A King I be and a king I am’
Said the Slithery Snake again and again.
‘But without a crown I am no king’
I’m just a regular snake with a mighty fine sting’

He was singing the blues and so it seemed
That he was a sad Blind Mouse with shattered dreams
‘Why are you so sad?’ Asked the Slithery Snake
‘I’m not sad,’ said the mouse ‘I’m in a great state!’

‘I may be blind, but I do see
‘All the beauty in life and the greatness of being me.’
‘Why are YOU so sad, might I ask dear snake?’
‘I do know sadness, I can hear your ache.’

The Snake took a minute, and then four
Before answering about what he had been searching for
‘A King I am and a King I be
‘I need a crown to therefore define me.’

The Blind Mouse just stared for awhile
Before breaking into a big wide open smile
‘No need for crowns, no need for stuff
No need for jewels, you have enough!’

‘If a King you be, then a King you are
Why would a silly crown define who you are?’
The Slithery Snake was ready to reply
But instead took off with a loud ‘GOODBYE!’

“A King I be and a King I am’
Said the Slithery Snake again and again
Who needs a crown when I do know
That I’m a true king, with but a crown to forgo

The moral of this story is to never pass up the opportunity to talk with a blues singing blind mouse.

I’ve come to the conclusion that reading the newspaper these days is an increasingly dangerous act. Not only is the news awakening a deep inner anger, but it has also made me realize I might actually be worried about the direction our world is heading. Environmental, corporate and political greed seem to be feeding my outrage as everywhere I look there are marks of environmental degradation caused by the drive for capital (and it’s only growing).

Now, I don’t intend to get overly political here, but I feel at a loss. Where’s today’s Robin Hood? Where’s the individual that will right wrongs on behalf of those in need. As Disney has taught me, there must be a hero in the battle of good and evil. Right?? … Wrong!

Although I love the tale of Robin Hood, idling around waiting for him/her is sadly not the answer. Alas, it is likely the majority as a whole that will need to become it’s own Robin Hood.

I myself have decided to jump into environmental action in seemly dull ways such as reducing waste, and continuing my efforts to plant an urban garden (that seems only to refuse to grow).  So because I can’t answer the question “where’s today’s Robin Hood?” I decided to offer you this Ninja Kitty depiction of a Robin Hood.

The Tale of the Tourists and the Escaping Iceberg

There comes a time in everyone’s life when a GREAT tale must be told. A tale worthy of the inquisitive bartender’s attention at the local pub. I now have one such a tale to tell (in lieu of regular blog posts). But be warned… tis indeed a tale of rough seas, landlubbers, and picnics.

It all began a week ago when I was compelled to venture inland to catch the elusive trout. Although I did not get a nibble, I decided to set my not-so-seaworthy vessel towards the location of some foreign rapscallion friends for the night. With tankards of tea, coffers of joy, and bellies full, rest was needed as I was to set off again the next morning on my unyielding search for a fishy.

A few hours after I had bid them farewell the next morning, news came that a group of foreigners had needed rescue from an escaping iceberg. It turned out my Mateys decided to board an iceberg in a glacier lagoon and the scallywag Iceberg would not be brought back to port. The unintended consequence was the iceberg drifted away from shore with the landlubbers on board.

They’d been had. With picnic accoutrements on board, they were collected by an Icelandic rescue team and brought back to shore.

This is how the story ends. The moral I hope ye all take is this: “Icebergs are not seaworthy picnic vessels.” Here be a link to an article on the event. http://www.mirror.co.uk/news/weird-news/group-tourists-rescued-after-drifting-1910698

This post is for all the mighty Iceberg sailing scallywags!

Today’s post is an exciting one. I finally received and fulfilled the first animal art request! I’ve even decided to celebrate by drinking a DOUBLE shot of espresso. It’s going to be a wild morning…

Anyway, the request entailed the combination of yoga and a bear. After looking online it turns out that bears are actually quite flexible and seemingly good at yoga. For someone who is not very good, the bears have earned my respect. I’ve done this particular pose in the painting before, and not only is it difficult to touch both feet at the same time, it is even more difficult to maintain composure and not look like a complete idiot. To top things off, this pose is almost always guaranteed to induce flatulence… just saying 🙂 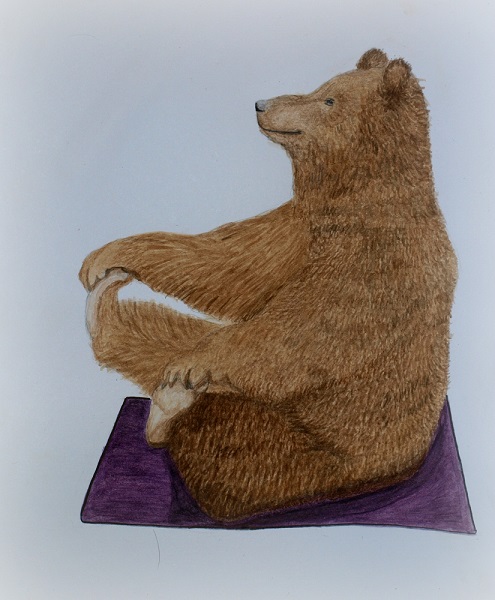 Have you ever sat down at the breakfast table, taken a sip of coffee and thought “I wonder what an emotionally stable singing ostrich would look like?” If you are anything like me, I bet you have. Well, here’s your lucky day! Today’s animal related art features one such an ostrich. Although I can’t imagine it’s singing would be overly inspiring, I’m sure with the use of auto-tune it would end up sounding much better than your average mainstream pop artist. 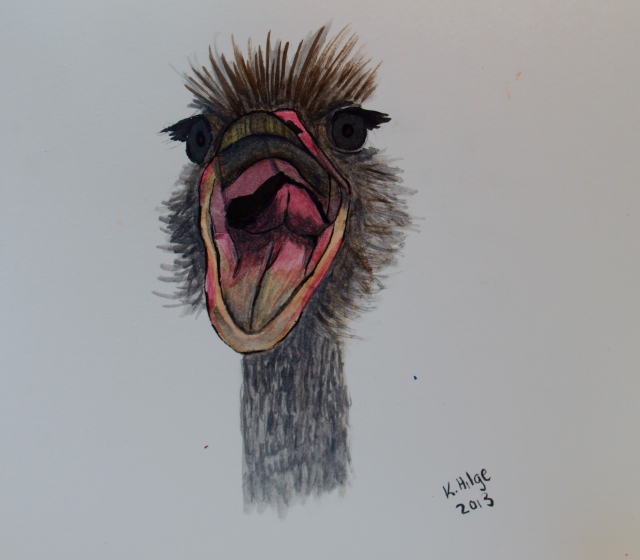 The First Instalment of Requestable Art

In all honesty no one requested today’s painting, but someone did ask for ‘anything with sloths.’ I liked the idea of doing something with a sloth because I find their exact nature slightly bewildering. Here we have a monkey-like animal that sleeps more than a teenage boy and moves slower than me prior to a morning cup of coffee. Add the crazy ass claws and their ability to wrap themselves around objects with gangly tenderness and you have one oddly evolved creature.

Seeing as I have a mild infatuation with sloths riding motorized vehicles (as can be seen in my past webcomic here: http://lemoncomics.tumblr.com/image/38140047818 ), I figured I would continue with this train of thought and paint a sloth ‘riding’ a motorcycle. I now present the first piece of requested animal art… Here is a true King of the Road. 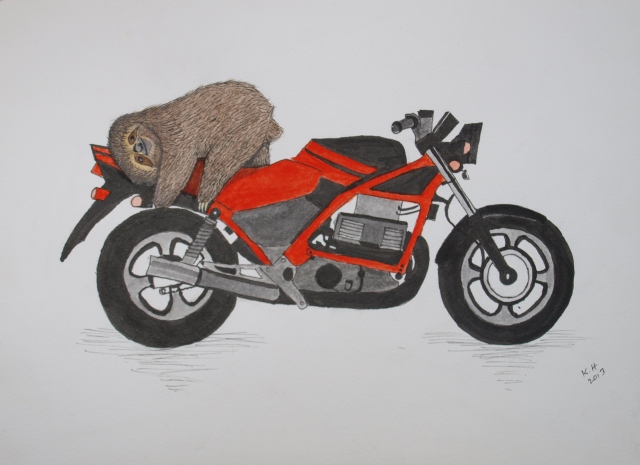 King of the Road

I would love to receive more art ideas! Please do send some my way. The more elaborate… the better!

I would officially like to announce that the Ninja Kitty website is getting another slight makeover. After a few months without any blog entries, I am now ready to accept the fact I lost my ipad and must move on from illustrating my life using the device.

As a result, I am changing the blog to reflect my lack of ipad, but love of painting/drawing! Ninja Kitties will from this point on be known as a Ninja Kitty Animal Art Outlet!!! Let me explain this new concept.

I will paint/draw animals based on any descriptive recommendations people may have. For instance, you could write and ask the following:

“Hi Ninja Kitty, I always wanted to see a drawing of a classy monocled walrus riding a bike down a mountain.”

This request would then probably generate an image such as this. 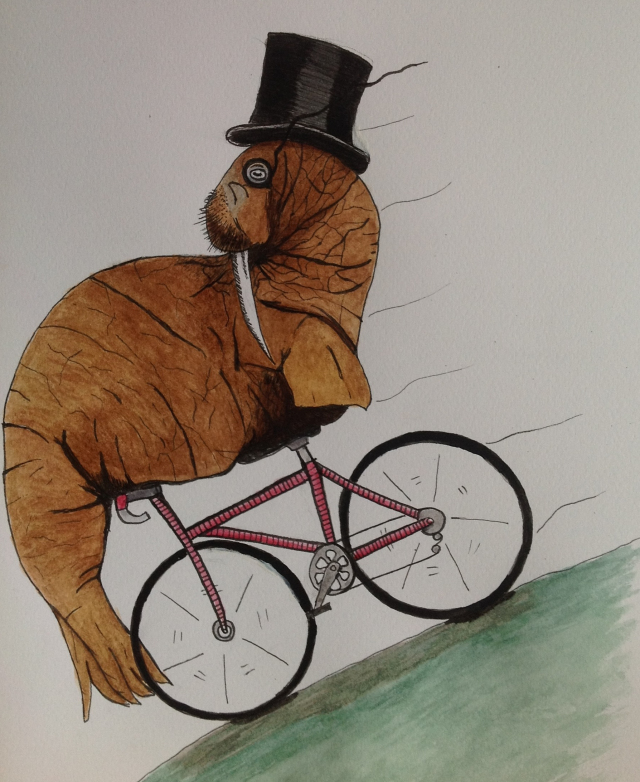 I will draw the requests I like best and then upload an unaltered photo from the original piece. You are welcome to request different styles so long as it’s not something crazy like… hyperrealism. If you do, I will likely draw you this as I can’t draw hyperrealistically.

The rules are simple.

2. Either click ‘Send A Request’ on the menu bar or email your request to ninjakitties1@gmail.com

3. I can’t guarantee how often I will post. C’est la vie